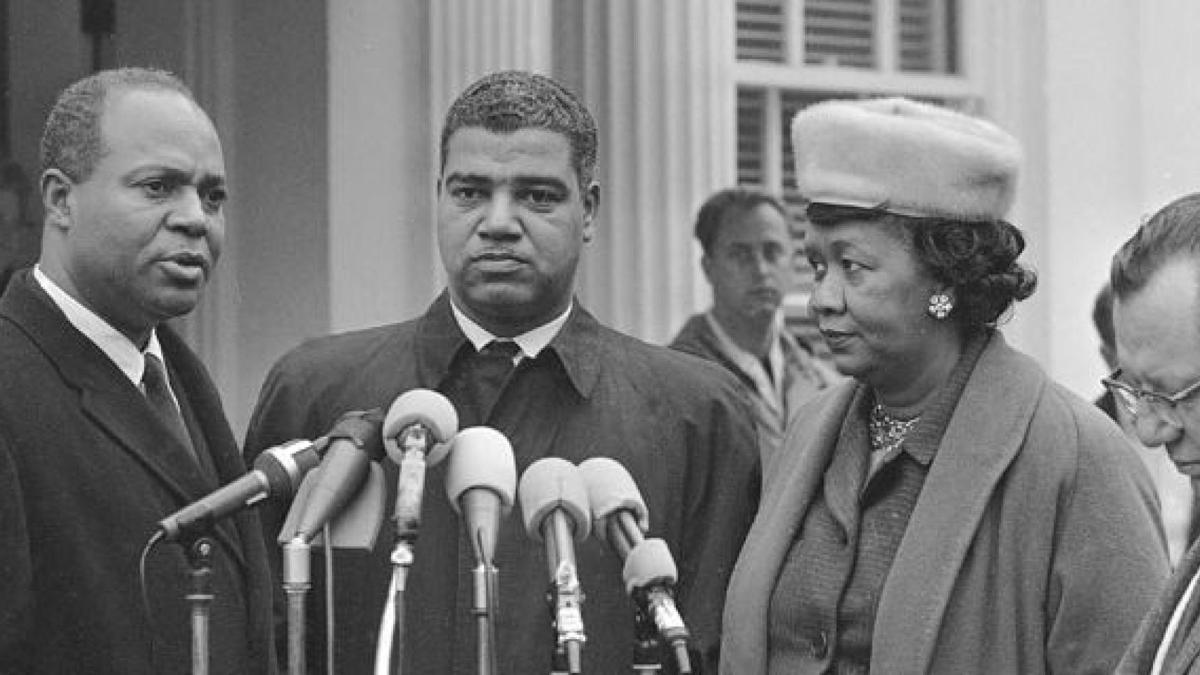 Black women were at the forefront of the Civil Rights Movement alongside the late Rev. Martin Luther King Jr. In addition to wife Coretta Scott King, soldiers such as the late Dorothy Height, Ella Baker and Dorothy Cotton helped pave the way for equality.

Height was a key organizer for the 1963 March on Washington, where King gave his infamous I Have a Dream Speech.

When King founded the Southern Christian Leadership Conference (SCLC), Baker, who had previously led the New York branch of the NAACP, did the field work to establish the Atlanta office.

And Cotton, an educator and community organizer, was a key figure in the SCLC, teaching African Americans about their right to vote.

Without Black women, there wouldn’t have been a Black freedom movement, and if the men would have opened up to their leadership, there could’ve been more progress, according to scholars and historians.

“The Civil Rights Movement would not have experienced success without our labor,” said Naomi Washington-Leaphart, adjunct professor of theology and religious studies at Villanova University. “Women pushed King to imagine deeper. Women held King accountable. And women continued the work after he was killed.”

Washington-Leaphart noted Baker’s work resonated with her the most because of her mission to empower people. Recognized as a vocal critic of the movement, Baker saw women as the heartbeat of the community.

“The movement of the 50s and 60s was carried largely by women, since it came out of church groups,” said Baker in a 1970 interview with historian Gerda Lerner. “It was sort of second nature to women to play a supportive role. How many made a conscious decision on tzhe basis of the larger goals, how many on the basis of pattern habit, I don’t know. But it’s true that the number of women who carried the movement is much larger than that of men. Black women have had to carry this role, and I think the younger women are insisting on an equal footing.”

Tiffany M. Gill, associate professor of Africana Studies and History at the University of Delaware and author of Beauty Shop Politics: African-American Women’s Activism in the Beauty Industry, describes Baker as an elder that was not afraid to disagree with King’s views.

“She first heard about him through the Montgomery Bus Boycott,” she said. “She was taken by King, she thought he was smart, a great speaker. [But] she also thought he was young and inexperienced.

“She thought she had a lot to offer King because she had been in the movement so long and had been working in the grassroots movement,” Gill added. “Being in touch with the needs of the people, she had a vision of the Black freedom struggle that was about empowering the ordinary folks — getting down with the sharecroppers.”

In the 1970 interview with historian Lerner, Baker stated that “My basic sense of it has always been to get people to understand that in the long run they themselves are the only protection they have against violence or injustice.”

Such ideas and others, accoding to Gill are key to understanding Baker’s critique of the Civil Rights movement.

“Her idea of leadership is very different from King’s idea and the ministers he worked with. Their idea was strong leadership that would bring people along. That’s where he and Ella Baker had their differences,” Gill explained. “They both worked together in the SCLC on quite a few things. Baker was the first paid staff member for SCLC. That was a sign of respect. Folks there respected her, but she still was not a part of King’s inner circle. Even though she knew a lot more, she was still relegated to get coffee, get notes, run papers off in lithograph. She openly critiqued them, but she still participated in the movement because she felt the overall goals were still important.”

Height, who served as president of the National Council of Negro Women (NCNW) for 40 years is also considered an elder to King. She cofounded Wednesdays in Mississippi that connected Black and white women from the North and South to have dialogue about civil rights. Height was also instrumental in the integration of the Young Women’s Christian Association (YWCA) and fought equally for women and Black people’s rights. Once, at the request of King, she organized a group of women to meet with the mothers of the four girls, who died in the Sixteenth Street Baptist Church bombing.

“Height was also someone who had been a staple in the movement before anybody heard of King,” Gill said. “Height’s work was done specifically with Black women and Black women organizations. She never was as publicly critical of King as Ella Baker. [But] I do find interesting, whenever Height talked about King, she would talk about how young he was and [being] a smart young guy, but it was definitely a way of her saying she was in the game a lot longer and he should respect her as such.”

In Open Wide the Freedom Gates: A Memoir, Height wrote she first encountered King in 1937 when he was 15 years old at the home of Dr. Benjamin Mays, the president of Morehouse College.

Later in the 60s, she would be the only woman to serve on the Council for United Civil Rights Leadership, or the Unity Council, a group that Height was “limited to the heads of organizations” and included King, Whitney Young of the National Urban League; A. Philip Randolph of the Brotherhood of Sleeping Car Porters, Roy Wilkins of the NAACP, and James Farmer of the Congress of Racial Equality (CORE), among others.

Height also co-organized and was seated near King at the 1963 March on Washington, when he delivered his I have a Dream speech.

“Height was often the only woman in the room,” Gill said. “[She] was upset because no woman was given the podium to speak in that full day of events. They allowed Mahalia Jackson to sing but no woman was given time to speak. Height was very adamant that women should be given the opportunity to speak but she was [overruled] by the organizer of the march. Whenever she had a chance, she was a fierce advocate of women and made sure women’s labor roles and leadership was taken seriously. Sometimes, she was successful and sometimes she wasn’t.”

In remembering this, Height wrote in Open Wide: “That moment was vital to awakening the women’s movement. [Bayard] Rustin’s stance showed us that men honestly didn’t see their position as patriarchal or patronizing. They were happy to include women in the human family, but there was no question as to who led the household!”

Cotton served as education director for the SCLC and developed its Citizenship Education Program, a key piece that taught people about the political process and trained them in voter registration. Her other key role, according to Gill, was emotional support.

“We know she was one of the women closest to him in the years before his death,” she said. “She worked with the SCLC in their Citizenship Education Program, which was about educating folks and communities not only about voting rights but with practical knowledge they weren’t getting in school.

“With her, there hasn’t been a lot of historical [accounts] but she carried a great deal of the emotional labor of the movement and that is something often unacknowledged that women do,” she added. “In her memoir, she talks about how it wasn’t always easy being a woman in the movement. Particularly for King, she was a confidant and really gave herself wholeheartedly. She got divorced as a result of her involvement with the movement.”

Anthony Monteiro, Ph.D., organizer of the Saturday Free School and a former professor who specializes in the writings of W.E.B. DuBois, said the treatment of women in the Black freedom struggle has to be looked at in a certain context, so as not to confuse the intent of some of the leaders.

“We are talking about at least 10 years of the evolution and development of men and women coming out of a relatively conservative South when it was certain acceptable behaviors for Black men and Black women,” he said. “With the rise of the freedom movement, they accepted those norms and transformed them at the same time.

“It didn’t happen overnight because people were being assassinated and under surveillance by the FBI,” he added. “But I give the freedom fighters the benefit of the doubt. You don’t have a Diane Nash, a Dorothy Cotton, a Myrlie Evers, a Coretta Scott King — you don’t have these kinds of women unless you have a revolutionary movement and revolutionary leaders. Given that the church was an institutional foundation of everything, there were church norms that everybody had to adhere to, but everything was being transformed and that’s what we have to look at.”

For Gill, the question remains how far Black people could have gone in the freedom struggle without the restraints on women’s leadership and their visibility. She uses Baker as an example.

“I personally think that while the movement has many successes, if leaders took Baker seriously, the gains of the Civil Rights movement would have been felt by a wider range of people,” she said. “Often, one of the critiques is that the Civil Rights Movement benefited a small group of African-Americans.

“What Baker was calling for was a more radical project,” Gill added. “It would have looked at more seriously the economics, the inequitable distribution of wealth. This is where King was going toward the end of his life, but this is always where Baker started. If we followed Baker’s vision more, the movement could have been more successful and had more lasting success.”