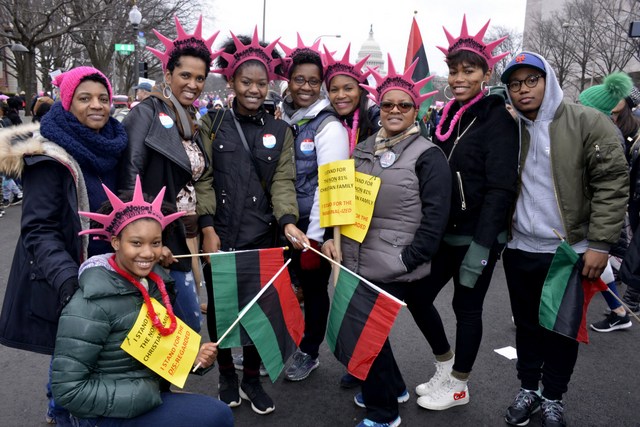 Previous item Norton Applauds USPS for... Next item Dorothy Height To Be...

As she stood amongst hundreds of thousands of women, men and children who came to Washington D.C. Jan 21 to advocate for women’s rights, former D.C. First Lady Cora Masters Barry reflected on the words of a local female icon of the Civil Rights movement.

“Dr Dorthy Height is looking down on us and smiling,” Barry said. “You can’t do a lot with one finger but with a clinched fist you can strike a mighty blow.”

And as women in cities across the country struck a mighty blow against President Donald Trump and conservative ideology and, according to national and local leaders, they are part of a movement and not just a march.

“We are more harshly criticized, we are more frequently criticized, and we are more wrongly criticized at every single level,” D.C. Mayor Muriel Bowser (D) told participants at the Women’s March on Washington. Women need “every woman and every man to speak up for us, too.”

While there were many prominent speakers from Madonna to Alecia Keys, the strongest statement came from the hundreds of thousands of women who packed the streets and the subway wearing pink caps, trumpeting vulgar signs in protest to Trump’s lewd comments about the female body.

“We are very excited that this movement has inspired so many people across the globe,” said Janaye Ingram, director of logistics for the women’s march.” We want people to harness their energy to create substantive change on local, state and federal levels.”

While observers say the march upstaged President Trumps Inauguration and shocked pundits in terms of  turnout, Ingram is not a newcomer to march planning.

“I planned the 50th Anniversary of the March on Washington and other marches and demonstrations, so I have experience working with agencies around these types of efforts,” Ingram said. “This planning took place in two months, happened a day before inauguration and had 4 national holidays that happened during the planning process.”

According to Rev. Dr. Barbara Williams Skinner, president of the Skinner Leadership Institute, a local non-profit leadership training organization, the march was just the beginning of a new progressive movement.

“The real America stood up city after city,” Skinner said. “As a woman of faith it was amazing to see all of the women standing for women’s rights and Human rights.”

But Barry, founder of the D.C. Southeast Tennis Center, said she is fighting the fight for every day workers to instill values in the lives of young people.

“We are instilling values into young people, socially, culturally and ethically,” Barry said. “These issues affect us all and we have to reinforce these lessons and emphasize the importance of voting.”