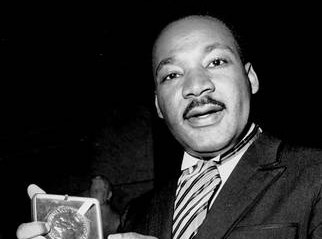 On the day we remember Martin Luther King Jr. and his importance to our society, we should reflect on him as not only a man of perseverance and soaring oratory but as a moral philosopher who led souls.

His majestic words are chronicled in the widely quoted “I Have a Dream” and “Letter From Birmingham Jail,” but the accuracy of his moral compass was evident long before in lesser-known speeches, sermons and writings.

The year was 1960, and King’s speech to a conference of the National Urban League revealed an introspective moral tone that served notice of the universality of freedom and human rights. The “struggle for human dignity is not an isolated event,” he said in an address titled “The Rising Tide of Racial Consciousness,” delivered to an overflow crowd. “It is a drama being played on the stage of the world with spectators and supporters from every continent.”

To King, the liberation movements that had begun to end colonialism in Africa and Asia, and the still-to-come March on Washington, the Selma and Birmingham campaigns, and Mississippi Freedom Summer were all part of a larger, unified human milieu. Embodied in each was the awakening of the self-respect that allows a person to toss off the yoke of oppression and “come to feel that he is somebody.” It knows no color or border, King would say, and it inspires people “with a new determination to struggle and sacrifice until first-class citizenship becomes a reality.”

With heads held high, millions would march and sacrifice blood and sweat for voting rights, fair public accommodations and educational opportunities. Buttressing those political goals were loftier spiritual truths. “The primary reason for our uprooting racial discrimination from our society is that it is morally wrong,” King would remind the audience that day and marchers every day. “It relegates persons to the status of things. Whenever racial discrimination exists it is a tragic expression of man’s spiritual degeneracy and moral bankruptcy. Therefore, it must be removed not merely because it is diplomatically expedient, but because it is morally compelling.”

Generations have lived and died since King delivered those words, their meaning still searingly resonant. In those words was the riveting truth that no one is truly free until everyone is free. “Injustice anywhere is a threat to justice everywhere,” he said, and “no American can afford to be apathetic about the problem of racial justice. It is a problem that meets every man at his front door.”

King’s voice could capture a spirit and was filled with ideas for the good not only of black Americans in Southern fields or Northern factories, but of all people in all hemispheres. It is the reason his voice will live forever as a great American and leader of humanity.

“Injustice anywhere is a threat to justice everywhere. Therefore, no American can afford to be apathetic about the problem of racial justice. It is a problem that meets every man at his front door.” — the Rev. Martin Luther King Jr., from “The Rising Tide of Racial Consciousness,” delivered to a National Urban League conference in 1960