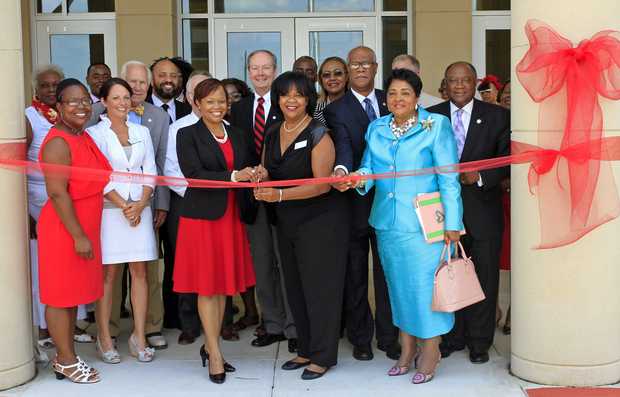 “If she was here today, she would be so honored,” said Lois Keith, co-chairwoman of the National Membership Committee of the National Council of Negro Women where Height served as president for 40 years.

More than 220 people filled the cafeteria of Dorothy I. Height Elementary School for the noon dedication at 1458 Benning Drive. At a cost of $17.5 million, the 91,000-square-foot school replaces Muscogee and Cusseta Road elementary schools.

Keith recalled how Height became her mentor after first meeting in 1990 during a National Black Family Reunion in Washington, D.C., and later as a board member for the National Council of Negro Women.

“When I first met her, she walked tall and straight,” Keith said. “She commanded attention when she walked into a room.”

Keith, who spent more than 30 years as an educator in the Henry County School System in metro Atlanta, said she was with Height when she started using a cane and later a wheelchair.

Keith and other speakers focused on Height’s personal attributes and some of her accomplishments before she died.

Height was born March 24, 1912, in Richmond, Va., but she grew up with her family in Rankin, Penn., where she graduated high school in 1929. Height earned a $1,000 scholarship from the Elks to help her attend Barnard College in New York, but she was denied entrance because the school already had admitted two black students for the year.

Keith said Height ended up attending New York University and loved every brick in the building. Years later, Barnard College apologized to Height and bestowed upon her an honorary doctorate degree. She received more than 36 honorary doctorates during her career.

Never married or had any children of her own, Height was determined to be an advocate for women and children around the world. During the civil rights movement, she was a leading organizer for the famed March on Washington. Height was near the Rev. Martin Luther King Jr. when he delivered his “I Have a Dream Speech” in 1963 but she wasn’t invited to speak.

Keith said Height always worked in the background behind the leaders of the movement.

“The media didn’t seek her out like it did some of the others,” she said. “If you look at history, you will find that she was always in the background making a difference. Whether it was the big six of the civil rights movement, Dr. Height was in the trenches all along. It was Dr. Height who did a lot of the leg work for that time period.”

In 1994, she was presented the Presidential Medal of Freedom from President Bill Clinton. When Height died on April 20, 2010, at the age of 98, President Barack Obama called her the “godmother of the civil rights movement.”

“All of us including the children who will walk the halls of this building possess those same abilities,” he said.

He left the crowd with one of Height’s famous quotes. “‘Greatness is not measured by what a man or woman accomplishes, but by the opposition he or she has overcome to reach his goals,’” he said.

The scene at the school was a learning experience for Rose Royston who has two children, ages 11 and 6, attending the new facility. Their former school was Muscogee Elementary.

“It was very interesting about the history,” she said of Height. “I didn’t even know who she was. They did tell me something. When I came here, I found out who she was.”

Royston said she is pleased with what she has seen at the new school. “So far, I like it,” she said. “It is way better than Muscogee.”