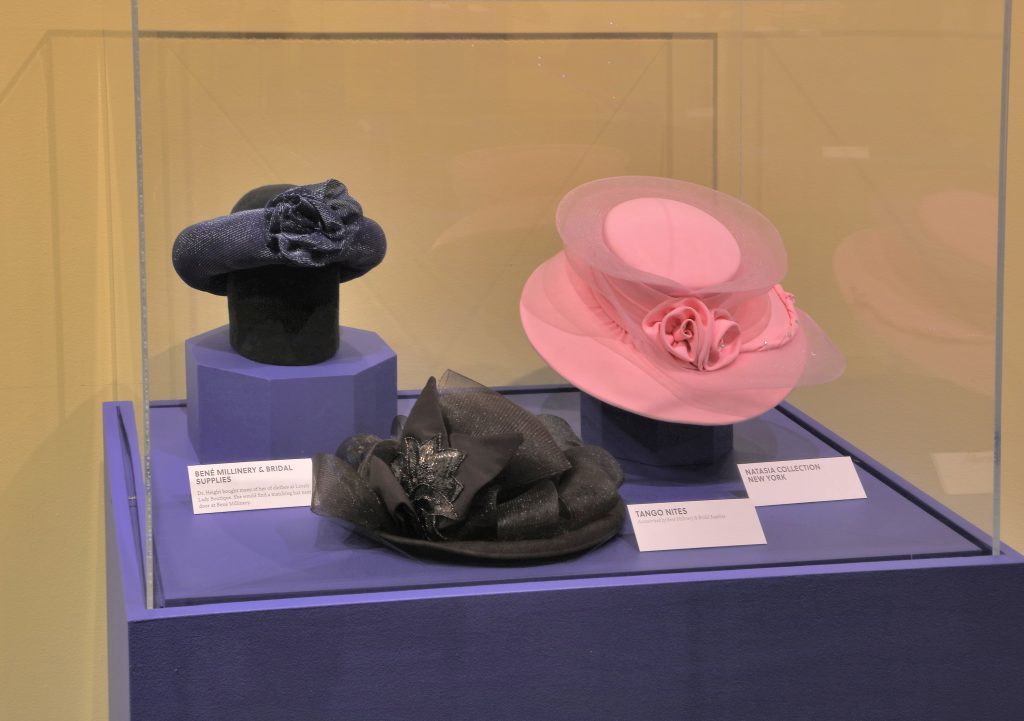 When You Go to a Museum

The following was shared by a visitor after she experienced the Dorothy Height hat exhibit at the Dayton Art Institute. Here’s what she had to say on her blog, A Year In Reading:

Last Saturday, Hubby and I went to the Dayton Art Institute to see the special exhibit “For America” before it closed on Sunday. It was an amazing collection. A requirement for membership into the National Academy is a portrait, and these (often of prominent artists) were paired with another piece by the artist who painted the portrait, or by the artist who was the subject of the portrait. There were lots of familiar artists (ie: white men), but I learned about some I will want to explore more deeply: Juane Quick-to-See Smith, an enrolled member of the Confederated Salish and Kootenai Tribes; Charles White, who painted “images of dignity” of African Americans; and Isabel Bishop, an Ohio native who was a leading member of the Fourteenth Street School of artists.

But it was what we found in the museum before we got the special exhibit that had the most profound impact on me. It was an exhibit of hats. Amazing hats. Over the top hats. So many hats owned by one woman.

One woman…and what a woman! Why had I never heard of Dorothy Height?”

From the introduction placard:
“Called the “Godmother of the Civil Rights Movement” by President Barack Obama, Dr. Dorothy Irene Height (March 24, 1912 – April 20, 2010) was an educator, activist, and a leader in the struggles for equality.
…she was rarely seen without a hat.
The hats worn by Dr. Height became a symbol of her personality, determination and poise. Often called “crowns” in the African American community, the hats are artistic creations, fashion items that Height wore on ordinary days and during extraordinary events in American history.”
Dorothy Height wrote a memoir, Open Wide the Freedom Gates.
She also wrote Living With Purpose
and The Core of America’s Race Problem.

She is featured on The History Makers: The Nation’s Largest African American Oral History Collection (a resource to explore more deeply…)

and on the National Visionary Leadership Project website (another resource to explore more deeply…).

Her eulogy by Barack Obama can be found on American Rhetoric: Online Speech Bank (yet another site that needs a deep dive).

I couldn’t find any clips from the Broadway musical, “If This Hat Could Talk,” but I did find an interview with Julia Garrison, who played the young Dorothy Height.

Here is an hourlong documentary that I will watch, “The Life and Surprising Times of Dr. Dorothy Height.”

Maybe I should be embarrassed to go public with my ignorance of this amazing woman, but instead  I’m going to bank on the possibility that I’m not the only one and make this a teachable moment about my own personal ongoing education in all of the aspects of American History that were not a part of my school curriculums (read BIPOC and LGBTQIA aspects).