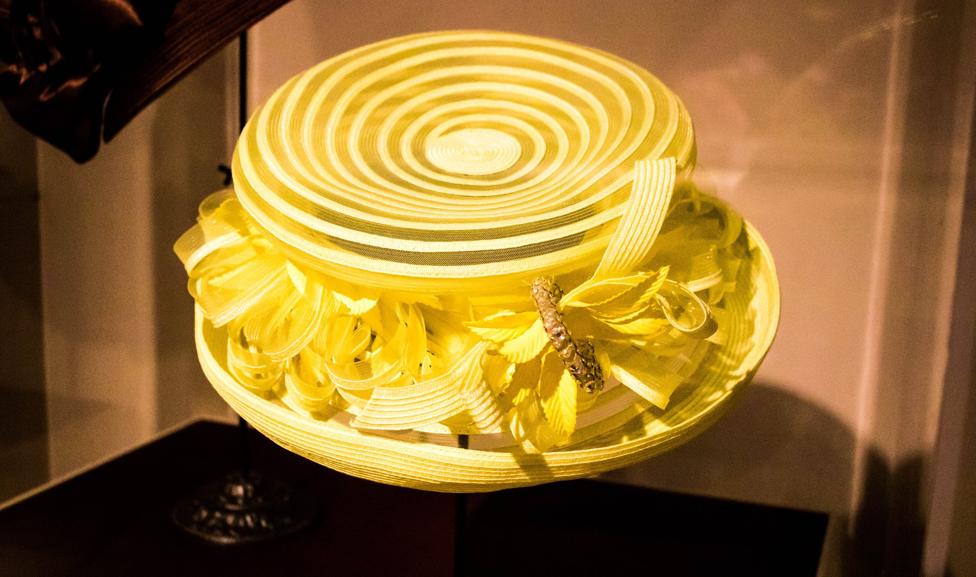 Previous item When You Go to a Museum Next item Dayton Art Institute...

After the publication of the popular book, “Crowns: Portraits of Black Women in Church Hats” in 2000, two of the Miami Valley’s most energetic Sharons — Sharon Howard, who was working for WDTN-TV at the time, and Sharon Kelly Roth, who handled publicity for Books & Co. — began inviting local church women to model their own hats at the bookstore.

Over the years, the Crowns Hat Fashion Show at at The Greene, a tribute to the African-American women’s tradition of wearing extraordinary hats to church services, became a standing-room-only event. Celebrity models joined in the fun with proceeds supporting breast-cancer research. A wall calendar, featuring the models in their hats and amazing coordinated outfits, was also a hit.

The current exhibit at the Dayton Art Institute will also have you oohing and aahing over gorgeous hats. They represent the personal collection of Dorothy Height, dubbed the “Godmother of the Civil Rights movement” by President Barack Obama.

Height, who spent her life fighting for equality and women’s rights, was the president of the National Council of Negro Women for 40 years, and also worked with the YWCA and the national Delta Sigma Theta sorority. An adviser to U.S. presidents and world leaders, she received 36 honorary doctorates and was recognized with the Presidential Medal of Freedom. She also won the Congressional Gold Medal — the highest award given to civilians.

Height encouraged President Dwight D. Eisenhower to desegregate schools and President Lyndon B. Johnson to appoint African-American women to positions in government. She wrote a column called “A Woman’s Word” and authored the book, “Open Wide the Freedom Gates: A Memoir.”

The civil-rights icon always wore beautiful hats and became known for them. Several of Dr. Height’s hats were first exhibited in 2005 at the National Council of Negro Women’s annual Black Family Reunion in Washington, D.C. She founded the family event in 1986 to highlight the positive values of the African-American family.

Forty-three of the 200 hats in the collection are on display at the DAI. You’ll also see historic photos of Height wearing these special hats on important occasions.

Not surprisingly, one of those who’ve enjoyed the current exhibit is Sharon Howard, now director of communications for Premier Heath. “I have to admit, it brought back so many memories of the ‘Crowns Hat Show’ that I hosted for more than 10 years,” Howard says. “Hats are such a part of African-American history, it’s hard to realize a time when hats were not a part of my life and the lives of my friends.”

Howard says many people outside of her culture notice the “art” of the church hat. “They love how our hats make a statement,” she says. “But in my community, the hat is a symbol of a ‘crown,’ i.e., the crown for the queen of black families, the mother. It is a symbol to honor the matriarch of families for the strength she provides.”

The exhibit echoes Howard’s thoughts. While hats were an intrinsic part of Height’s appearance, she always stressed that she “did not dress for success,” but out of respect for the values her mother taught her.

Jerry Smith, the DAI’s chief curator, is responsible for bringing the hat show to Dayton. “We wanted to bring Dr. Height’s hats to the Dayton Art Institute as a way to celebrate her life, to share her story with our guests, and to enjoy the great variety of hats she wore,” he says. ” The hats are displayed on a pedestal under Plexiglas, and in doing this they appear like soft sculptures, each with its own style and particular aesthetic quality. I love seeing people responding so favorably to the various styles.”

Smith learned the hats were being shown publicly a couple years ago while working at a Florida museum. “It was an interesting idea, so I worked with the Dorothy I. Height Education Foundation in Washington, D.C., in the selection of the hats to create an exhibition suitable for an art museum,” he explains. “We are showing different styles and highlighting different milliners, or hat makers.”

Smith says the exhibition was popular in Florida, and after moving here in late 2017, he thought it would be something the Dayton community would enjoy as well. “I’m happy to say the response has been extremely favorable,” he says. “People enjoy the hats and like learning about Dr. Height. The hats, many made by top designers, are like sculptures in fabric and can be enjoyed as such. However, knowing who wore them makes each that much more significant.”

“They’re not large enough to fill our expansive Special Exhibition galleries, and they allow us the flexibility to showcase exceptional works of art and tell a variety of stories,” says Smith.

The most recent example is “Monet and Impressionism,” a current Focus Exhibition that features 14 works including three by Monet. That’s especially timely since Monet’s “Haystacks” just sold for $110.7 million, an auction high for an Impressionist work.

“To think of it another way,” concludes Smith, “Focus Exhibitions are the appetizer when compared to the main course of a special exhibition.”